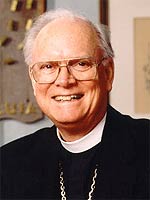 The Rev. H. George Anderson was elected bishop of the Evangelical Lutheran Church in America on August 19, 1995, during the ELCA's fourth Churchwide Assembly, in Minneapolis, Minnesota.

Anderson, a Phi Beta Kappa graduate from Yale, earned graduate degrees from the University of Pennsylvania and the Lutheran Theological Seminary at Philadelphia, and is known as a translator and author of many works on Lutheran history. At the time of his election he was president of Luther College, having served in that capacity from 1982 to 1996. Prior to his tenure at Luther he was on the faculty of Lutheran Theological Southern Seminary, Columbia, South Carolina, and served as its president from 1970 to 1982.

Anderson was born in Los Angeles March 10, 1932, and adopted by Reuben and Frances Anderson. On the day he was elected bishop he compared that adoption with the unconditional love of God. "Adoption by those parents and adoption as a child of God has been a gift with me all my life," he said, "a feeling of being appreciated and valued by someone."

That feeling of belonging, and what Anderson calls "a sense of guiding and providence in my life," has sustained him through a distinguished career, a personal tragedy and a chain of events that nearly put him at the head of a Lutheran denomination in 1978.

Anderson, then president of Lutheran Theological Southern Seminary in Columbia, S.C., was the leading vote-getter in the balloting for the presidency of the Lutheran Church in America. In an ironic twist of fate, he would have succeeded Dr. Robert J. Marshall, the pastor who had confirmed him at Grace Lutheran Church in Alhambra, Calif., in 1945, but he said he could not "visualize" himself as head of the LCA. "I interpreted that as the lack of an inner call to that task," he said, and withdrew his name.

The personal tragedy was to come next, as his wife was diagnosed with cancer. "If I had been elected then, I would have been pulled away from home at a terrible time," he said. "I had precious time to be with her during those days."

The death of his wife four years later was a test of faith, he recalls. He had just become president of Luther College in Decorah, Iowa. The parents who had adopted him had recently died, his father's death coming within 10 weeks of his mother's. He assumed the role of single parent of two teenagers at the same time he took over the leadership of one of the country's most prestigious Lutheran colleges.

"I went through a period of depression," he said, "trying to function from day to day." It was worship in Decorah Lutheran Church and at the college chapel that sustained him. "I could listen to other Christians singing hymns of praise, even if it was difficult for me to do so," he said, "and that became a great blessing."

The new ELCA bishop reflected on numerous moments of blessing while speaking to reporters following his election. He recalled the time in 1945 when Pastor Robert Marshall began serving as his pastor in Alhambra. Pastor Marshall, who later became the president of the LCA, quickly determined that Anderson and the other young people were not properly prepared for confirmation, and the rite was delayed "until we learned those important basics of the faith."

The call to the ordained ministry was also unexpected. Following his first year at Yale, where he found campus pastors "challenging and stimulating," Anderson had volunteered as a youth worker in a mountain parish in western Virginia. "The pastor contracted Bell's palsy," he remembered, "and I ended up accompanying him every day as he did his pastoral work." The experience led him to switch his interests from science to theology, and he enrolled in the Lutheran seminary in Philadelphia in 1953.

Another unexpected opportunity set him on a distinguished career path as a historian and theologian. He was invited to accompany Kenneth Scott Latourette, a noted church historian, on a research trip to Europe. "He was a strong influence on me," Anderson said, "for he was an intellectual with a strong spiritual life."

Throughout his life, Anderson said, there was a sense of security and confidence, fed by his sense of adoption by human parents and by God. He later married Jutta Fischer, a woman who had been a student at the South Carolina seminary during his presidency, and adopted her two children.

Though it is common for church leaders to be asked to reflect on their past, Anderson had words about the future for the ELCA Assembly. Those words applied the faithful confidence he had described in his personal life to the 5.2 million member denomination. "As to the future," he said, "God has promised that as long as the earth endures, the church will be here. The future is not our enemy. It belongs to God."

In addition to serving the church over the years in many voluntary capacities, Anderson's record of community service includes organizing the College Place Day Care Center, co-founding the Eau Claire Community Organization, and serving as a director of Minnesota Public Radio (1984-90).

As bishop, Anderson wrote a regular column in The Lutheran magazine, and completed "A Good Time to Be the Church, A Conversation with Bishop H. George Anderson," Augsburg Books, February 1997. Other works include co-authorship of several volumes of the "Lutherans and Catholics in Dialogue" series, many scholarly essays, book chapters and translations over the course of three decades.