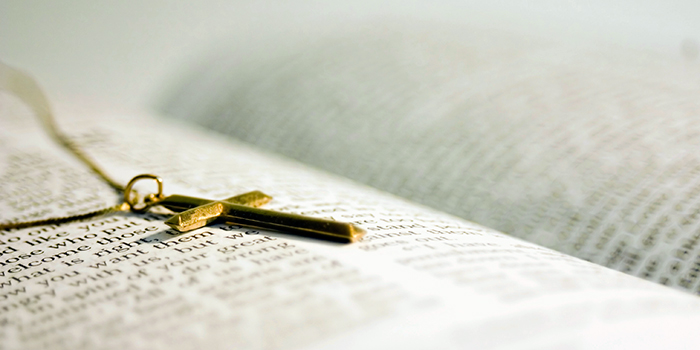 A cradle that holds the infant Jesus. Baby blankets that clothe the newborn Christ. Lutherans often use these well-known metaphors from Martin Luther to describe the Christian Scriptures and their importance. These simple metaphors clearly and profoundly describe both what the Scriptures are and what is their purpose.

Simply stated, the Scriptures tell about Jesus Christ. The Holy Spirit uses the Scriptures to present Jesus to all who listen to or read them. That is why Lutheran Christians say that the Scriptures are the “source and norm” of their teaching and practice. As the Gospel writer John wrote, “these things are written so that you may come to believe that Jesus is the Messiah, the Son of God, and that through believing you may have life in his name” (John 20:31).

Obviously, the Scriptures that are collected into a book or Bible describe and speak about many other things — everything from the creation of the world to the world’s end. Because these writings originate from a time period that spans about a thousand years and come to us in a variety of handwritten manuscripts and fragments, they have been studied carefully with all the tools of research that are available. This research continues to enrich understanding of the Scriptures and their message.

Despite the diversity of viewpoints and the complexity of the many narratives contained in the Scriptures, Lutheran Christians believe that the story of God’s steadfast love and mercy in Jesus is the heart and center of what the Scriptures have to say.

Like the Scriptures, the three ecumenical creeds — the Apostles’ Creed, the Nicene Creed, and the Athanasian Creed — are written documents. They originate from the earliest centuries of the Christian church’s history, a time when theological and philosophical questions about the identity of Jesus were widely debated among Christians. All three creeds affirm that God is fully present in Jesus, that Jesus Christ is both God and human (not a semi-divine or superhuman creature that is neither). These three creeds are called ecumenical because they are all accepted and used by the overwhelming majority of the world’s Christians. All three are affirmed in the Lutheran confessional writings and in the ELCA’s governing documents.

Although these three creeds, like the Scriptures, are written, most Christians experience and use them spoken aloud with other Christians in worship. Along with many other Christians, Lutherans use the Apostles’ Creed at baptism; it is also the Creed most often used in basic Christian education (as in the Small Catechism). Lutheran Christians often use the Nicene Creed at festivals like Easter and Christmas and during seasons of the year related to those festivals. Some Lutheran congregations recite the Athanasian Creed on Trinity Sunday (the Sunday after Pentecost) because of its focus on the relationships between the persons of the Triune God.

On many occasions in the 16th century, Martin Luther and other evangelical reformers were asked to give an account of their teaching and practice. In response Philip Melanchthon, one of Luther’s colleagues, wrote, “We must see what Scripture attributes to the law and what it attributes to the promises. For it praises and teaches good works in such a way as not to abolish the free promise and not to eliminate Christ.” Although the writings that comprise the Book of Concord engage a range of issues regarding teaching and practice, they do not address every question or topic. Rather, they focus on the Scriptures’ purpose: to present Jesus Christ to faith.

The Book of Concord includes seven writings composed by Luther and others. Lutheran churches around the world have affirmed these writings, and the ELCA affirms them in its governing documents. Lutherans most often use them in teaching — for example, when the Small Catechism is used in basic Christian instruction, or when the Augsburg Confession is used to teach women and men preparing for ministry.