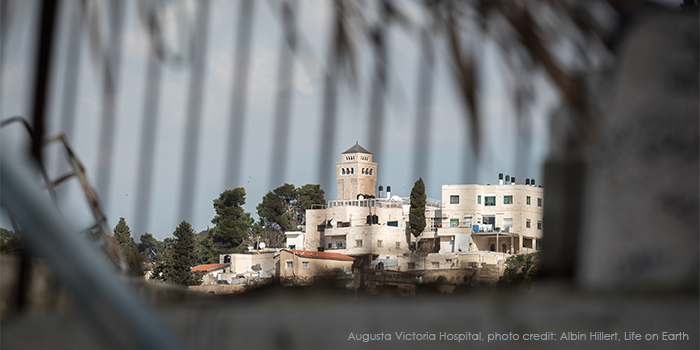 The situation:
On May 10, violence erupted in Palestine and Israel after weeks of escalating tension sparked by protests following the eviction of multiple Palestinian families in East Jerusalem and police violence against protesters and worshipers in Jerusalem, including at the Al-Aqsa Mosque. During the 11 days of Hamas rockets and Israeli airstrikes, over 240 people were killed (including more than 60 children), most of whom were Palestinians in Gaza. Thousands more were injured. In Gaza, hundreds of buildings, including houses, schools, medical centers and businesses, were destroyed. Because of damage to housing units, up to 72,000 people are internally displaced. The closure of border crossings has limited the amount of humanitarian and medical aid allowed to enter Gaza. Although a cease-fire was agreed upon on May 21, the situation is still fragile, and humanitarian aid is much needed.

Our response:
Lutheran Disaster Response is supporting Augusta Victoria Hospital in Jerusalem as staff members secure medical supplies and medications to treat cancer patients in Gaza. Augusta Victoria is operated by the Lutheran World Federation and is the leading hospital for cancer patients in Palestine. With the closing of border crossings, these patients are unable to leave Gaza to receive chemotherapy treatment and many medications are unavailable, delaying urgent care. A team of nurses, doctors and surgeons from Augusta Victoria will enter Gaza to treat 400 patients and supply them with much-needed medications.

What you can do:
Pray
Please pray for people who have been affected by the conflict between Palestine and Israel. May God's healing presence give them peace and hope in their time of need.

Give
Your gifts designated for “Middle East Crisis” will be used entirely (100%) to provide long-lasting support for those whose lives have been impacted by the violence in Palestine.