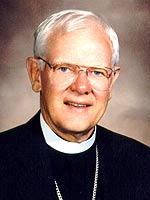 The Rev. Dr. Herbert W. Chilstrom was the first ELCA bishop, elected to his post at the church's constituting convention in April 1987. He was re-elected to a four-year term at the 1991 ELCA Churchwide Assembly in Orlando, Fla.

He is the former bishop of the Minnesota Synod of the Lutheran Church in America, one of the three church bodies which merged to form the ELCA on Jan. 1, 1988.

As bishop of the ELCA Chilstrom was the president and chief executive officer for the church. His responsibilities included oversight of the staff, budget and overall administration of the ELCA.

Chilstrom was the church's chief ecumenical officer and represented the ELCA in several national and international organizations. He served as a vice president of the Lutheran World Federation based in Geneva. He headed a committee for the National Council of Churches who explored special relationships between the NCC and Roman Catholics and evangelicals.

A native of Litchfield, Minn., born October 18, 1931, from 1958 to 1962 Chilstrom served as pastor of the Faith Lutheran Church in Pelican Rapids, Minn., and Augustana Lutheran Church in Elizabeth, Minn. In 1962 he became a professor of religion and academic dean at Luther College, Teaneck, N.J. He held that position for eight years before accepting a call to be senior pastor of First Lutheran Church, St. Peter, Minn., in 1970. In 1976 Chilstrom became bishop of the Minnesota Synod.

Chilstrom has been a member of the board of directors for the National Conference of Christians and Jews for the Minnesota/Dakota region, 1985-1987, Commission for a New Lutheran Church, 1982-1986, and the Executive Council of the Lutheran Church in America, 1978-1982.

Chilstrom is also an author. His works include the book Hebrews -- A New and Better Way. He has been a contributor to Faith and Ferment, Augsburg Sermons, and Lutheran Book of Worship Occasional Service Book.